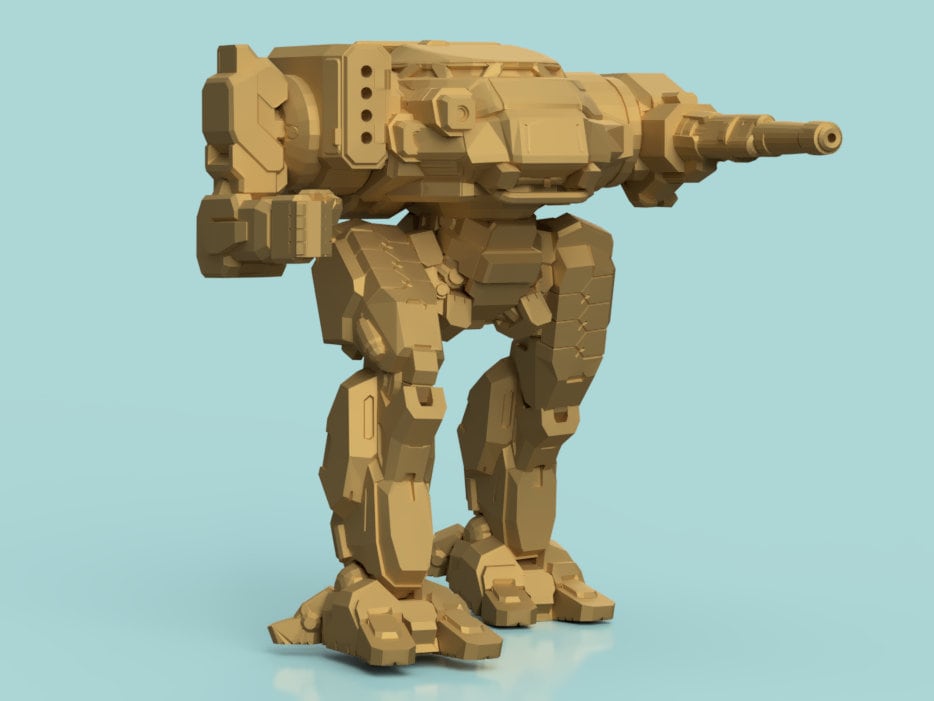 The Sentinel is a medium BattleMech built by Defiance Industries, originally under exclusive contract for the Lyran Commonwealth, as an infantry support and installation defense 'Mech. While initially pleased to have a then Terran Hegemony controlled factory manufacturing the 'Mech exclusively for the LCAF, the Lyrans were less so when a Star League Council amendment in 2652 permitted the Star League Defense Force to purchase a highly advanced version of the design which Houses Steiner, Marik and Davion would not receive until years later. The Sentinel was one of many designs to suffer from the technological decline of the Succession Wars era, with Defiance first losing the ability to manufacture its advanced weapon systems before discontinuing production entirely in 3014 due to lack of both parts and interest. Rather than disappear from the battlefield, the Sentinel now began to appear in increasing numbers thanks to ComStar and its massive stockpile of SLDF material, both providing the design to the Draconis Combine prior to the War of 3039 and using it to help outfit its Com Guards.

The Star League Sentinel carried a somewhat unique and highly advanced armament for its time. Its primary weapon was a Kawabata Weapons Industries Ultra Autocannon/5. Developed especially for the 3L, this advanced weapon was capable of firing at double the rate of a standard AC/5, at the cost of slightly increased possibility of jamming the weapon until it can be overhauled. The Sentinel also mounted an advanced Defiance Streak SRM-2, the launcher designed to only fire if it gains a lock, saving ammo until the entire salvo is virtually guaranteed to hit. However the weapon's benefits were hampered by the companion Small laser, the swap from the fragile A-1 for more sturdy Defiance B-1A moved the launcher's ammo feed by half a meter, resulting in ammo jams during abrupt maneuvers. Though MechWarriors discovered that they could clear a jam in the field by thumping the 'Mech's chest with its right fist, opponents quickly learned to concentrate fire on any Sentinel performing this, forcing pilots to retreat from battle anyway.

Ignoring its weapons load-out, the Sentinel was a relatively mundanely constructed 'Mech, built on a standard chassis and clad in five and half tons of armor. A dependable Pitban 240 rated Fusion Engine gives the 'Mech a top running speed of 97.1kph, but when first manufactured the engine was also blamed as the cause for chronic overheating of the 'Mech. An investigation eventually found instead it was an issue with the heat circulation of the 'Mech's ten standard heat sinks, which required a field replacement program and redesign for future production.

With a powerful targeting and communications package, the Sentinel was ideal for long-range patrols or mobile observation. Able to operate on multiple frequencies, it could not only closely monitor and command units operating under it, but also maintain contact with rear-area artillery for fire support.