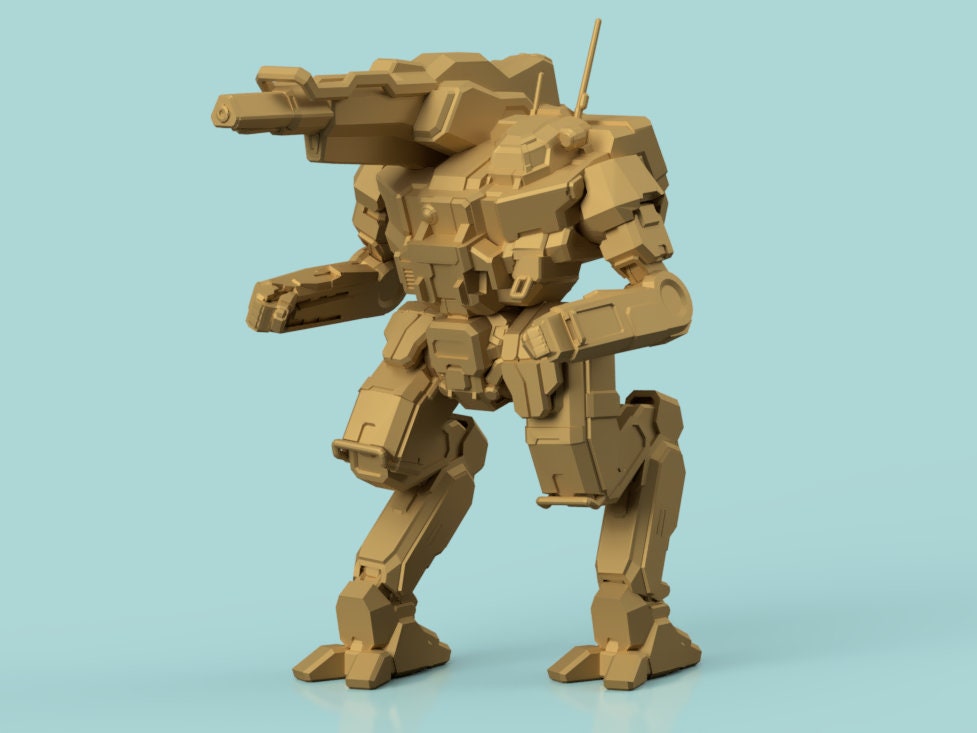 The Hollander was introduced in 3054 specifically to carry a Gauss Rifle into combat and act as a sniper. The Federated Commonwealth was in dire need of a response to the fast-moving, long-range firepower of the Clan Invaders at the time, and looked at a number of light 'Mech designs featuring PPCs or LRMs as a potential answer. It was Coventry's unorthodox decision to mount such a large weapon, one that had neither the overheating or ammunition explosion drawbacks of the other designs, which won them the contract. With its single massive cannon and use of rediscovered technology, the Hollander can destroy another light 'Mech in a single hit at extreme range and threaten heavier targets easily.

Unfortunately, Coventry was a bit too ambitious with the original Hollander design and had to make a number of cutbacks to get a working production model. Even using advanced lightweight materials, space and weight concerns forced a number of concessions in order to mount such a massive weapon. The original six tons of armoring was scaled back, especially around the torso and arms, so that the weapon could fully articulate, and the fusion engine was reduced in size due to the weight of the weapon. Ammunition stores had to be reduced and secondary weapons eliminated due to space concerns as well. As such, the Hollander's speed profile was reduced to that of a Clan heavy 'Mech, and it has nothing to fall back on if it should run out of ammo.

In spite of these setbacks the Hollander still boasted tremendous firepower and was cheap to build, leading to its immediate deployment as a light hunter-killer 'Mech. The first production run of Hollanders went to the 17th Skye Rangers and the 1st Kearny Highlanders, operating against Clan Jade Falcon on Barcelona and Mogyorod respectively, where they were hoped to prove effective against the Kit Fox. Other units, including prominent mercenary commands, also began to receive Hollander shipments thereafter. Since its debut numerous variants of the Hollander have attempted to address the flaws in the design, including the use of an even heavier chassis to create the Hollander II models.

The only weapon carried by the Hollander is a Poland Main Model A Gauss Rifle, taking up the 'Mech's right torso. While incredibly powerful, only two tons of ammunition in the center torso means the Hollander can fire just sixteen times before it is completely defenseless. So long as it still has ammo though the Hollander is very dangerous, as its heavily-reinforced legs - fitted with recoil compensators and support hydraulics - allows the 'Mech to accurately target and fire at the enemy even when running at top speed. Built on a Coventry BZK-III Endo Steel chassis, the 'Mech is protected by four tons of Lexington Limited High Grade Ferro-Fibrous armor; both design features were meant to save on weight as much as possible. However, its seven-ton Omni 175 engine gives the 'Mech a cruising speed of only 86.4 km/h. While not enough to actually catch its intended targets - light and medium 'Mechs - in a foot race, the Hollander's role as a long-range sniper does not necessarily require a high top speed.