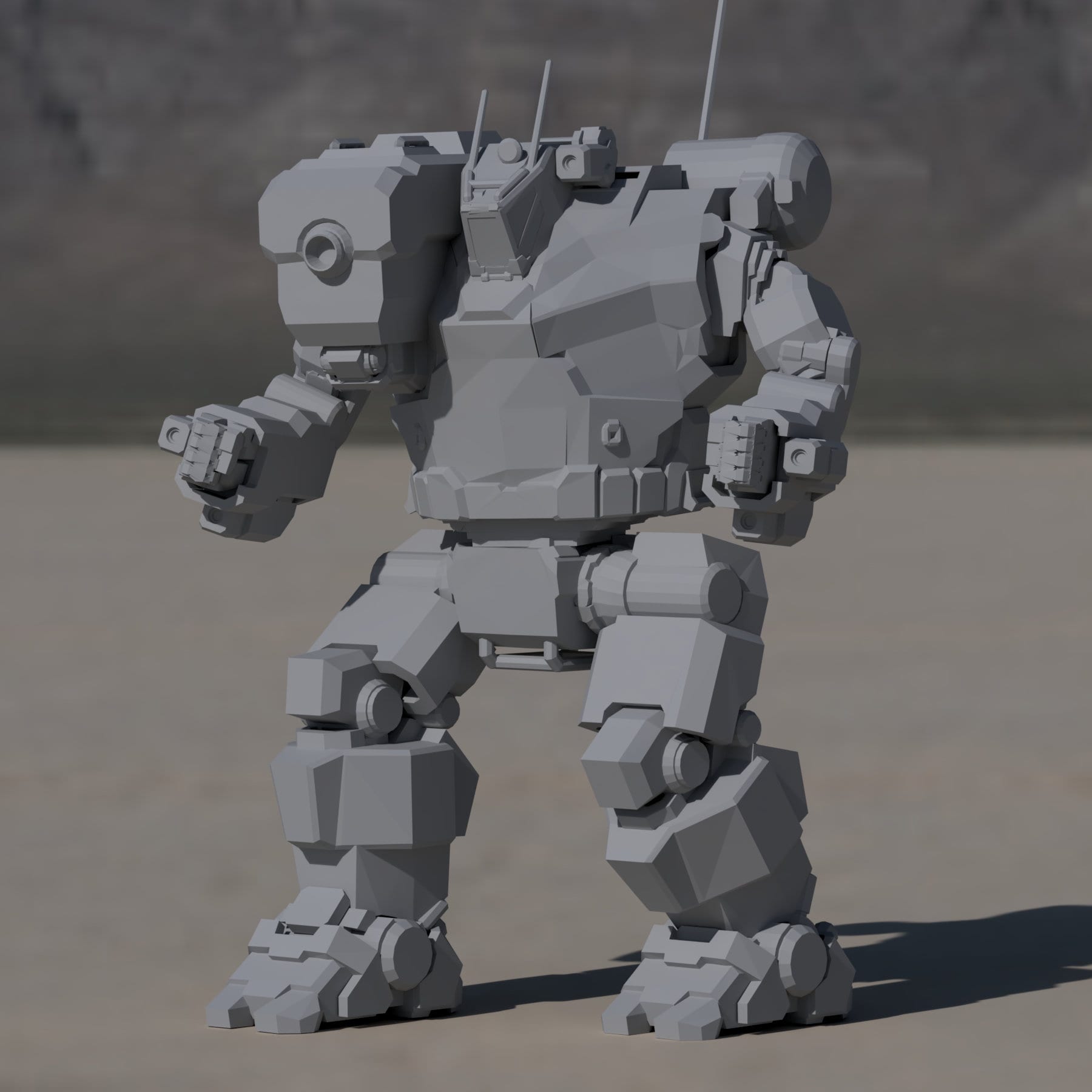 The Hunchback is a respected and feared Reunification War-era street fighter that has been in production since its introduction in 2572. Built for urban combat and close range brawling, this BattleMech has the heavy armor and weaponry to stand up against any foe in the dense cover of a city environment. Its heavy armament does come at a cost: in terms of maneuverability and heat dissipation the Hunchback is merely average, while the lack of long-range weapons means the Hunchback is little more than a slow moving target in the open. In an attack the slow speed of the Hunchback forces it to participate as part of the second wave, exploiting any weaknesses in the enemy's armor after they've been softened up.

The Hunchback was originally designed and produced by Komiyaba/Nissan General Industries and sold throughout the Inner Sphere and Periphery, often fielded as part of medium and assault lances. The company was destroyed in the Succession Wars, but the Hunchback continued to remain popular, especially in the arsenals of House Kurita and House Liao where it fit the dueling nature and all-or-nothing combat styles of the two Successor States. Eventually Kali Yama Weapons Industries bought the rights to the Hunchback and restarted production at their factory on Kalidasa to supply House Marik with large numbers of the 'Mech.

Dwindling stockpiles of spare parts and personal preference led many owners to remove the Hunchbacks large signature autocannon and typically install smaller weapons in larger numbers in its stead, resulting in a variety of variants collectively known as "Swayback'" because of the significant change to the 'Mech's configuration and torso structure.

The rediscovery of lost technology in the years prior to the Clan Invasion inspired a number of old designs to be upgraded, the Hunchback included. Under contract from the Free Worlds League Military, Kali Yama engineers designed a variant, the HBK-5M, which sought to improve upon the original while still maintaining the "soul" of the machine. While the new variant included several improvements, mostly involving extra protection against ammunition explosions and overheating, to the chagrin of many MechWarriors this came at the cost of reduced ammunition for the autocannon. Their objections ignored, production began in 3046. The new variant came into widespread use throughout the FWLM until Operation Guerrero, when this drawback was responsible for the failure of several advances. After this, Kali Yama finally produced a new variant–the HBK-6M–which addressed this concern. In the years since, Norse-Storm BattleMechs opened a refit line to produce new Hunchback variants and the 'Mech saw use on both sides in the Jihad.

Weapons and Equipment
The primary weapon on the Hunchback is a Tomodzuru Autocannon Mount Type 20 which can strip one and a quarter tons of armor off an enemy 'Mech in a single blow. Mounted prominently in the machine's right torso it is fed by two tons of ammo carried in the left torso. This weapon is paired with two Ichiba 2000 Medium Lasers, one in either arm, and a Diverse Optics Type 10 Small Laser mounted in the Mech's head. All of the weapons carried by the Hunchback, along with its two heavy battle fists, make it a devastating opponent at close range. Sadly, with a cruising speed of 43.2kph, it takes slightly longer to get in range.

Ten tons of Starshield armor is comparable to the amount carried by many heavy 'Mechs. Unfortunately this has also caused many a MechWarrior to consider the Hunchback an even match for these behemoths. In truth the 'Mech does not have the endurance for a straight-up slugging match with many heavier 'Mechs, and when the armor is breached an opponent's next shot is likely to knock out the autocannon or set off the ammunition. Likewise, firing the autocannon produces a tremendous amount of heat which, if not carefully managed, can force the Hunchback to shut down despite its thirteen heat sinks.

When Kali Yama restarted production of the HBK-4G they replaced some of the components used in the original design. Instead of the Komiyaba chassis these newer 'Mechs use a Crucis Type V chassis while the Tomodzuru autocannon and Ichiba medium lasers were replaced with Kali Yama Big Bore and Hellion-V models. Both the communication and targeting-tracking systems were also replaced with an Omicron 4002 Networking Channel and TRSS Eagle Eye respectively.

Big thanks to the seller for helping me out with a custom order, very helpful in arranging the order and excellent communication. Great quality as always, will be back for more after some much needed painting!