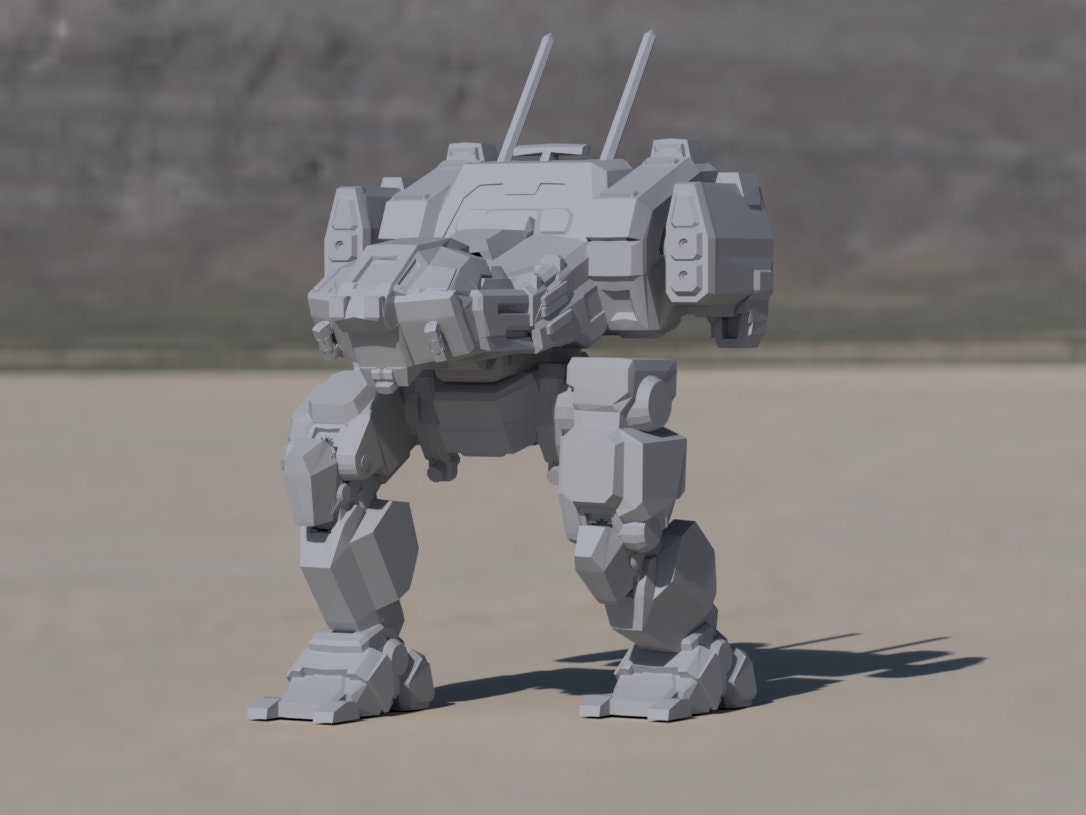 Introduced in 2784, the fact that the Jenner was the sole property of the Draconis Combine was long a source of national pride. Designed, produced and (for over fifty years) solely used by the Combine, the Jenner was meant to be a fast guerrilla fighter which would go on to form the foundation for highly mobile lances. Five Smithson Lifter jump jets, two in each side torso and one in the center torso, gave it a jumping distance of 150 meters, while its 245-rated Magna fusion engine allowed for a top speed of over 118 km/h, making it faster than most other 'Mechs. The drawback of the original model was its armament of a Diplan HD large laser and two Argra 27C medium lasers, all mounted in a turret which could be easily disabled with a well-placed shot, while the medium lasers' targeting systems proved to be bug-ridden. After some tinkering, this setup was eventually replaced with the weaponry found in the JR7-D model, creating a good mix of speed and firepower, though only four tons of armor provide paltry protection compared to other 'Mechs in the same weight range.

The Jenner became the standard light warhorse of the DCMS with the outbreak of the First Succession War, though its reputation would be forever tarnished following its role in the Kentares Massacre. Construction of new Jenners continued at Diplan MechYard's factory on Ozawa until a raw mineral shortage caused a halt in 2815, though they continued to produce new chassis. In 2823 production resumed on Ozawa, with some three thousand chassis shipped to Diplan's subsidiary on Luthien for final assembly, which itself was retooling to being full-scale production; by 2830 both production lines were producing 1,350 Jenners a year. The sheer destruction of the Succession Wars finally took their toll when the last Jenner factory was destroyed in 2848, though so many Jenners had been produced by then that nearly every DCMS battalion had at least one of these 'Mechs well into the War of 3039. While the other Successor States eventually managed to procure operational Jenners (every AFFS regiment along the Combine border had at least one), the design remained in predominant use by House Kurita.

A favorite tactic of Jenner lances was to gang up on larger 'Mechs and unleash a devastating alpha strike. One or two of the 'Mechs would be equipped with inferno rounds, so even if the enemy survived the first strike they were badly damaged and running hot, allowing the Jenners to jump to safety and cool down themselves. A few seconds later the attack would be repeated until finally the enemy was dead. It was also common practice to pair the Jenner with another Combine 'Mech, the Panther, creating a deadly combination of sheer speed and firepower with the slower Panther provided cover fire for the Jenner's flanking attack. The Jenner was such a favorite among Kurita MechWarriors that it became the benchmark against which all other newly designed Combine 'Mechs were compared.

While rebuilding a Jenner production line on Luthien became a top priority under Gunji-no-Kanrei Theodore Kurita, the necessary construction time along with inexperienced Combine engineers meant that even with ComStar aid this wasn't possible until 3046. The recovery of much lost technology and the Jenner's prominence within the DCMS made it a prime candidate to receive new upgrades, however Luthien Armor Works deliberately avoided any radical changes to preserve the original's core advantages. Hence while the new JR7-K began replacing the earlier model with little fanfare, it wasn't until the Jenner started to be outclassed by other designs using superior technology that Jenner pilots began complaining. Still there was reluctance to make any changes, and slowly many commanders began mothballing their Jenners in favor of newer light 'Mechs and OmniMechs. Since then a few variants have utilized advanced technologies in their design, notably one based on the Clan Jenner IIC, but it would take the devastation of the Jihad for many of the older K models to see frontline combat again.

Fantastic quality and arrived swiftly. Just be wary as the antenna are very slim and fragile! :) Will be ordering again from this store in the future.

This was part of an order of 4. Original order misplaced by Courier. Great comms from Paul, who helped resolve the issue and replaced the models like for like. Hassle free and would very much recommend. I will certainly be buying from again! Model quality is spot on!