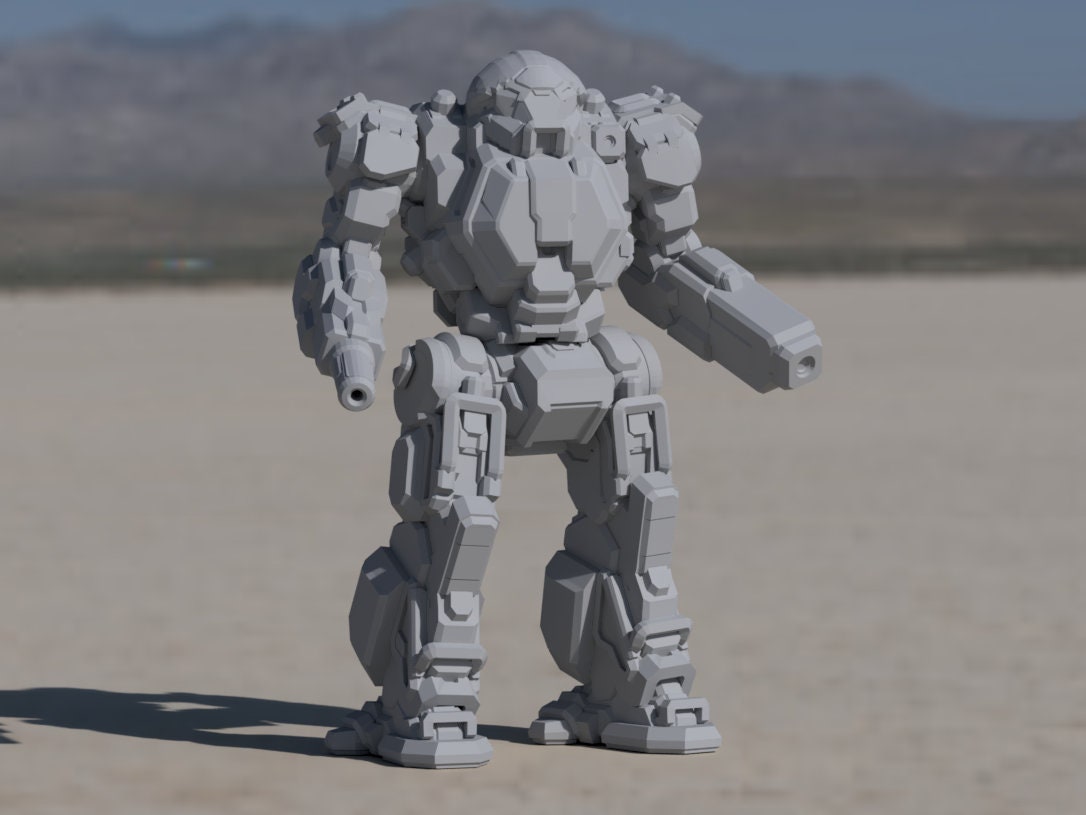 Since it first walked off of the production line, the Enforcer has been the iconic medium-weight workhorse of the Federated Suns' Succession Wars era military. This is in large part due to production of the Enforcer remaining largely undisturbed throughout the Succession Wars, despite the relative lack of industrialization that has long hampered the Federated Suns. With the autocannon-obsessed Armed Forces of the Federated Suns building up its BattleMech forces upon the collapse of the Star League, the discovery on Achernar of schematics for an unbuilt autocannon-carrying Star League 'Mech was a case of perfect timing. Modifying one of the designs by swapping two medium lasers for a single larger one, Achernar BattleMechs rushed the design through development and began production in 2777.

The Enforcer fulfilled the roles of a mobile barrage vehicle, laying down an intense hail of fire as prelude to an offensive or to blunt an enemy's attack, and a trooper 'Mech, using its thick frontal armor and good jumping distance of one hundred and twenty meters to effectively brawl with the enemy despite lacking hand actuators. The sturdy and inexpensive design's mobility also made it an ideal city fighter, especially when sniping the enemy during hit-and-run attacks. One of the design's problems was that, with most of nine tons of armor concentrated forward, the amount of protection in its rear torso is less than in some light 'Mechs. The Enforcer's biggest flaw though was its limited ammunition stores, though when possible a truck-and-crane reloading system is used during less-mobile battles. Attempts were made to replace the small laser with another ton of ammunition, however there were complicated linkage problems in getting the ammo from the left torso to the right arm, increasing the rate of jamming or reducing the rate of fire to unacceptable levels. What's more the rounds had to be routed along the 'Mechs back where its armor was weakest.

As many of the secrets of Lostech were recovered by the NAIS, Achernar brought in many veteran Enforcer MechWarriors to help them design the newest model, the ENF-5D. This variant became the standard medium 'Mech for the Federated Commonwealth when it debuted in late 3050, and the Armed Forces of the Federated Commonwealth immediately contracted to buy the entire line for a ten-year run. The AFFC distributed the new 'Mechs to key formations including the Davion Brigade of Guards, Royal Guards and FedCom Corps, and bought up Achernar's upgrade kits for other distinguished units. However demand for the new Enforcers during the Clan Invasion out-stripped Achernar's ability to supply them, requiring First Prince Hanse Davion to order that Kallon Industries be granted a license to produce Enforcers. Both companies would continue to produce Enforcers through the next twenty years until the Jihad, when Kallon Industries' plant on Talon, moon of Wernke, was destroyed in 3069.

Fantastic little Minis best quality 3D prints I have seen so far on here very crisp detail an absolute joy to paint. (I made a few modifications to the Hunchback as I ordered the wrong one my fault.) I can’t recommend this seller enough if you are looking for Battlemechs in the U.K. this is your one stop shop fast postage and fantastic quality minis I will definitely be back.