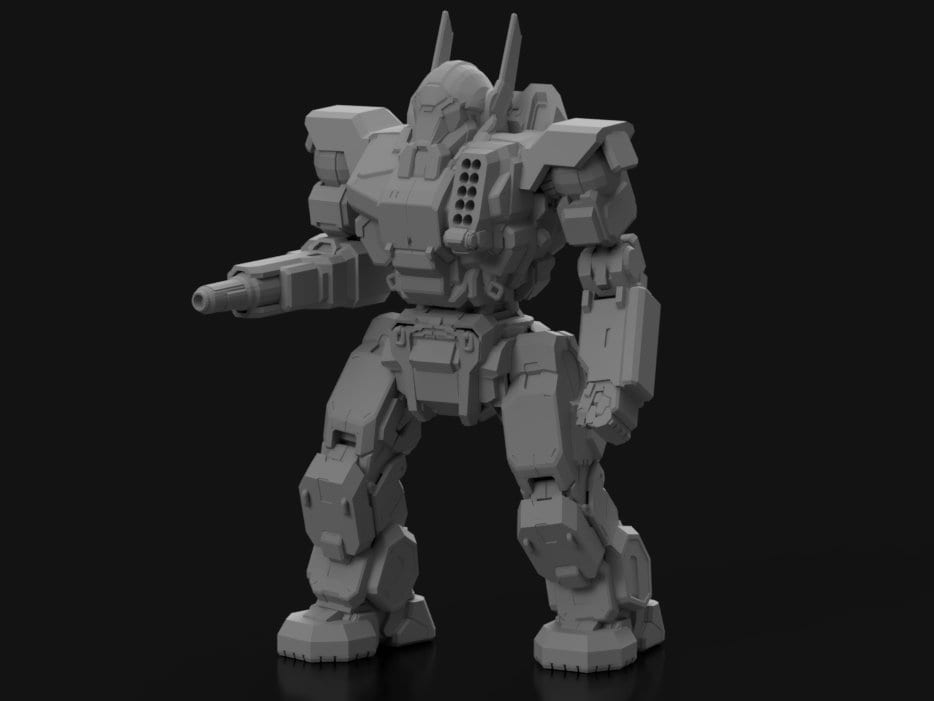 The Valkyrie was originally planned for use by the Star League Defense Force but production of the BattleMech did not begin until 2787, after the fall of the Star League and the start of the First Succession War. Because of this odd twist of fate, and because the only factory to produce the Valkyrie was located on New Avalon, the only nation to possess a large number of Valkyries was the Federated Suns. During the Succession Wars the Valkyrie became the standard light 'Mech of the Armed Forces of the Federated Suns, often replacing the lighter Wasp and Stinger 'Mechs in many units and given to experienced MechWarriors to pilot. While not as fast as either design, the Valkyrie has an almost comparable jumping distance, heavier armor, and longer-range weaponry. Capable of maintaining a high rate-of-fire while jumping as often as it liked, the Valkyrie gained a reputation for tenacity, and once on the attack "it stays with you until either you drop or it does."

Corean Enterprises was able to maintain a steady production rate of 130 Valkyries per year during the Succession Wars, reaching almost 200 per year during the desperation of the First Succession War, and with its location in the heart of the Davion realm that rate was rarely under threat, although the possibility of the automated factories breaking down for good remained a growing concern during the technological decline of the Third Succession War. Every regiment, and nearly every battalion, had at least one Valkyrie 'Mech under its command, with some recon companies equipped with entire lances of Valkyries. The Davions were also willing to sell the 'Mech to mercenary outfits contracted to serve them, while relatively few found their way into the hands of the other realms through battlefield salvage. One major setback in Valkyrie production did occur during the Fourth Succession War, when the Draconis Combine captured Marduk, site of Norse BattleMech Works and producers of the 'Mech's Norse Industries 3S jump jets. Production fell behind for the next few years as Corean tried several other jump jet models without success, until finally settling on HildCo Interplanetary's Model 12 line of jump jets.

Following the formation of the Federated Commonwealth, its nascent military force was faced with the problem of combining two entirely separate militaries into one unified whole. Part of the solution was commonality of equipment, and the Valkyrie was chosen to be the standard light 'Mech of the AFFC. Following the discovery of the Helm Memory Core, the New Avalon Institute of Science was able to restore the Valkyrie industrial complex to its full Star League era production rate, while Corean was able to utilize lostech components to construct the new VLK-QD model starting in 3049.

The FedCom Civil War took a particularly heavy toll on light 'Mechs, and the Commonwealth was in desperate need of replacements; unfortunately Valkyrie production had halted when the St. Ives Compact was conquered by the Capellan Confederation and Hildco was no longer willing to supply Corean with jump jets. At the time the company was in negotiations with Vicore Industries about reviving the Valkyrie design with two new variants, the VLK-QD1 and VLK-QD3, and Vicore just happened to have the solution to their problems. The company had secretly negotiated to build Hildco jump jets under the Vicore name, and was willing to sell these components to Corean in exchange for the right to build both variants. Corean agreed, and Valkyrie production restarted on New Avalon and Demeter, with new units reaching Davion forces by July 3067.