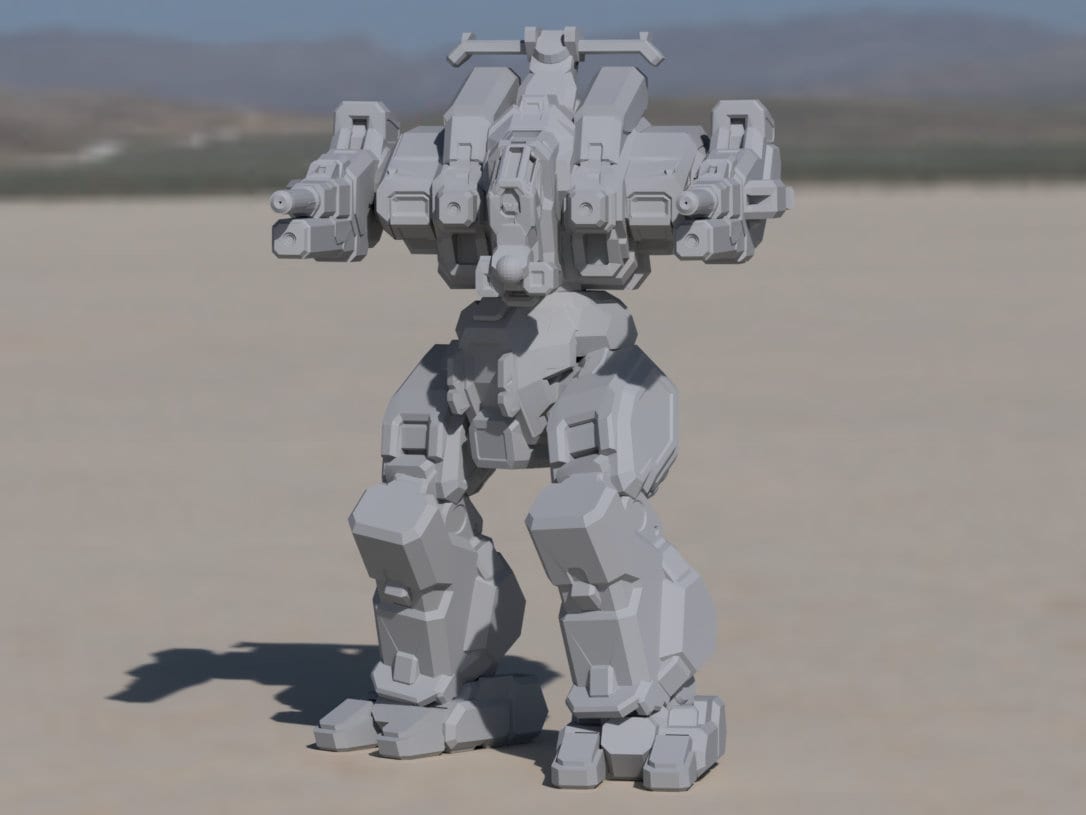 The definitive anti-aircraft 'Mech, the Rifleman was first fielded in 2505, making it among the earliest 'Mechs ever built. Designed as a medium fire-support platform, the Rifleman was plagued with a variety of problems since its debut and was ill-suited as a front-line combatant. However, its combination of long-ranged weaponry, including rapid-fire autocannons, and its excellent targeting and tracking system ensured it would remain a viable battlefield unit through half a millennium of combat.

Kallon Industries built the first RFL-1N Rifleman for the Star League Defense Force, but chronic overheating problems forced a return to the drawing boards, with an improved RFL-2N introduced fifty years later. Kallon's engineers still believed the 'Mech suffered too much from overheating, and tried to fix the problem with the definitive RFL-3N by replacing some of its heat-intensive energy weapons with autocannons. Although a marked improvement, the engineers were still not satisfied with the end result and tried to produce a 'Mech which would address the issues of heat management, protection and endurance which continued to plague the Rifleman. Their response, the JagerMech, featured several improvements over the older 'Mech but did not wholly replace it, instead complementing it whenever the two served in the same unit together.

With the collapse of the Star League and start of the Succession Wars, the Rifleman was scattered amongst the militaries of the Successor States. House Davion fielded the largest concentration of Riflemen and used them to good effect in their battles with House Kurita. Unfortunately, combat losses increasingly forced many Riflemen to be deployed directly on the front-lines, where their deficiencies in close combat against similar-mass 'Mechs was apparent. After the recovery of the Helm Memory Core, rediscovered lostech was used in an attempt to improve upon the venerable Rifleman, with manufactures deploying a number of new variants around the time of the Clan Invasion.

By the time of the FedCom Civil War, new prototypes of Rifleman variants were still being worked on, but the aging 'Mech had since acquired a poor reputation due to its weak protection and bad heat management. The 'Mech experienced something of a revival though when Kallon's factory on the moon Talon was subjected to a blockade by the 7th FedCom RCT, disrupting production of the newer JMS-7 JagerMech. The company brought up their experimental RFL-8D Rifleman to full-scale production as just a temporary measure, but the improved 'Mech wound up being fielded by both Loyalist and Allied forces during the civil war. Additional variants were introduced since then, with both the Free Worlds League and Word of Blake making use of advanced Riflemen during the Jihad.

Item was a custom one-off print from a third-party source relating to a similar item, The Rifleman III. The quality of it is brilliant and very happy with the outcome and detail on the print, the picture doesn't do it justice! I would definitely recommend the seller, and will purchase from him in future!