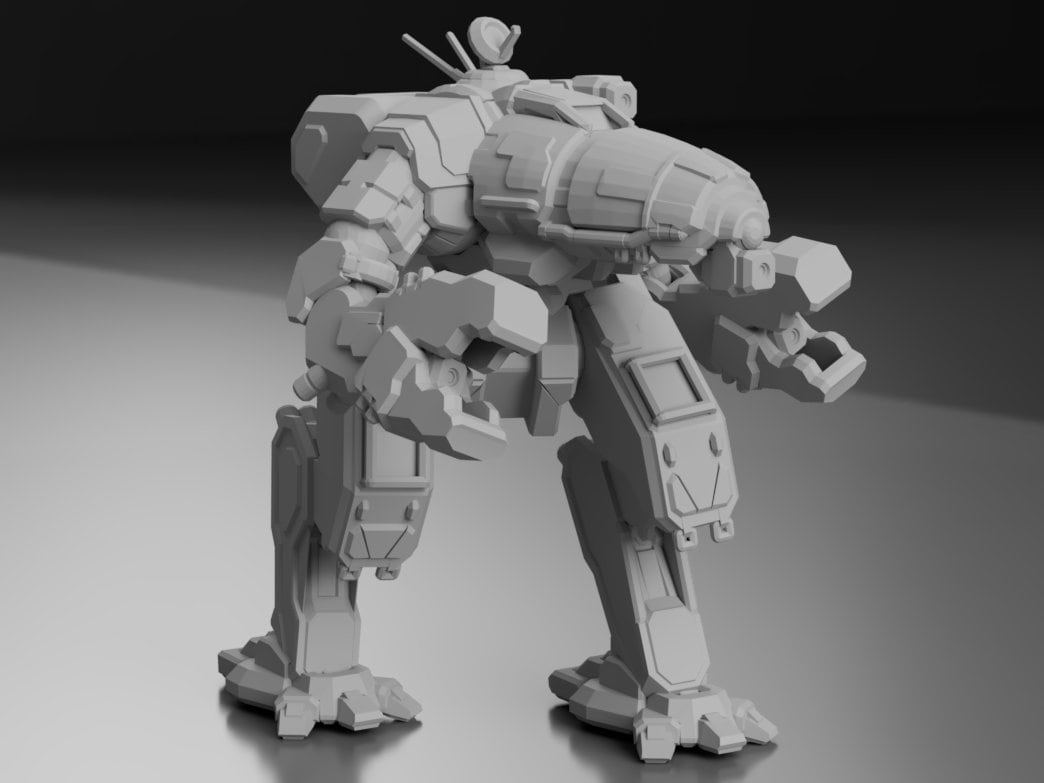 Designed in 2719 during the last days of the Star League, the Crab was built as a medium-weight raider and guerrilla fighter for the Star League Defense Force. Although lacking hand actuators or jump jets, it possessed good overland speed and its all-energy weapons payload was suitable for long-range missions without the prospect for resupply. The Crab also boasted a highly advanced communications system, the Dalban Series K, and was built mostly with proven parts easy to maintain. The term "Crab walk" soon became synonymous with easy duty, since technicians spent less than half the time maintaining the Crab than with other 'Mechs of the same weight class. So popular was the Crab that many believed it was likely to become the standard medium 'Mech of the SLDF. Unfortunately the Amaris Civil War and the dissolution of the Star League put an end to any future plans for the Crab.

Less than a thousand Crabs had been produced when the Succession Wars began. Cosara Weaponries' Crab factory on Northwind was practically destroyed in 2786, one of many strategic targets attacked in the opening salvos of the First Succession War. Although dedicated technicians were able to keep portions of the assembly line open, producing what spare parts they still could to rebuild damaged Crabs, the technology used for both the original's advanced armor plating and communications system became lost. Designated as CRB-20 models, these Crabs were only slightly inferior to the original: with the destruction of the military infrastructure necessary for the Dalban Series K's more advanced functions to work, its replacement by lesser systems ironically became less of an issue. By the end of the Fourth Succession War a hundred or so Crabs were still active in the Inner Sphere and all were CRB-20s.

Unbeknownst to many, ComStar had secreted away massive stockpiles of Star League technology and 'Mechs, including the Crab. When it came time to form their own military original CRB-27 Crabs were used to outfit the Com Guards, while at the same time gifting downgraded CRB-20s to the Draconis Combine during the War of 3039 as part of Operation Rosebud. Concurrently the discovery of the Helm Memory Core allowed the refit line on Northwind to start upgrading the remaining downgraded Crabs to their original specification. Unknown to anyone in the Inner Sphere was the continued existence of the Crab in the arsenal of the Clans, although by the time of the Clan Invasion these had been relegated to second-line and garrison units. Eventually Cosara Weaponries was able to restart production of the original Crab in the 3050s and brand-new variants began turning up. Among these were new CRB-30s built by ComStar (later acquired by the Word of Blake) which made use of new C3 technology; it was also rumored ComStar sold these models to the rump Free Rasalhague Republic. During the Jihad the Word of Blake managed to capture the Northwind factory and begin producing their own radical variant known as the CRB-45.

The Crab carries two RamTech 1200 Large Lasers, each housed in the claw and forearm of either arm. While excellent weapons they are quite delicate with the focusing mirrors liable to be knocked out of alignment if used in hand-to-hand combat; fixing them requires the pilot to leave their cockpit and stick their head up into each arm's elbow to make the necessary adjustments. Backing up the large lasers is a Ceres Arms Medium Laser in the center torso, well-protected from the fusion engine and with easy access to the sixteen heat sinks, and an Exostar Small Laser in the head, a last-resort weapon more suitable for fighting infantry and rioting citizens. Nine tons of Ferro-Fibrous Armor provides good protection for its size as even the weakest locations, the left and right torso, can each survive a shot from a PPC. Originally lacking hand actuators, Cosara later provided a refit kit to install one in either or both arms.

The centerpiece of the Crab is its Dalban Series K communications system with an integrated 650 RND targeting-tracking system. It monitors all radio and short-wave bands to not only determine the 'Mech's exact location on a world but the approximate location of other units, friend or foe, without the use of satellites. The system was smart enough to predict enemy movements and project a path towards a given location while avoiding their notice. However in contrast to the rest of the 'Mech this system was extremely hard to maintain, even breaking down when not in combat. As the Succession Wars dragged on only the most elite and prestigious mercenary and House units could maintain the system, and when the last living Series K-certified technician died it soon became a matter of guesswork.

The other notable feature of the Crab is its ejection seat, which performs in two different modes. When an explosion is imminent, the top hatch is blown off and the seat ejected up through the roof as commonly seen in other 'Mechs, with seat stabilization thrusters providing a controlled fall some 200 meters away. If more time is allowed, then the seat will instead rotate 90 degrees and eject the pilot out the back of the 'Mech. This is a much briefer and gentler experience for the pilot, with their seat landing some 50 to 90 meters behind the Crab.

Excellent miniatures, much more detailed than I expected and delivered super quickly! Will be ordering more!

TL;DR: Seller is excellent in all ways, definitely recommend. Before my order I asked quite a few questions and the seller was incredibly helpful and is a great communicator. Ended up purchasing three 'mechs and they were dispatched and sent to me very quickly. Once the 'mechs were delivered there was some damage to the antenna on a couple of them and, after notifying the seller they were incredibly helpful, providing me with both advice and TWO possible solutions that I could choose from to make the issue right. I would 100% recommend this seller. They are easily the best supplier in the UK for 3D printed 'mechs in my experience.